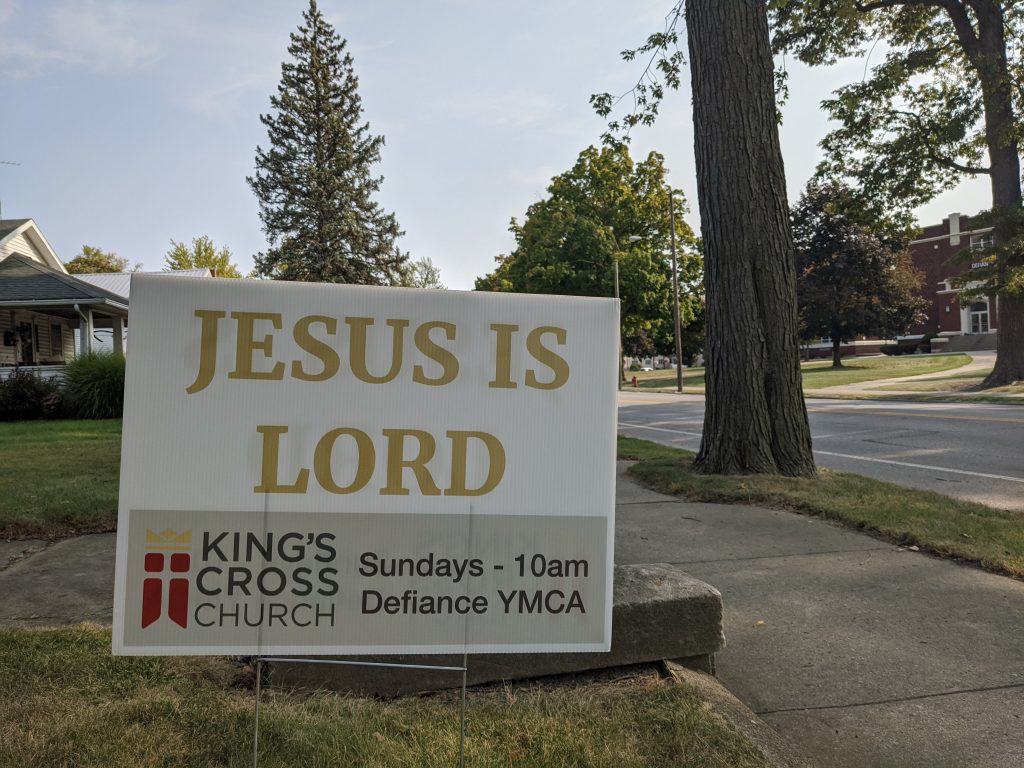 “Jesus Is Lord” Is Political

Our church printed yard signs that resemble election signs for our people to put in their yards if they’re so inclined.  I slyly told one church member that we’re printing political yard signs for the church, and he spoke his mind hesitantly saying “Ugh…I hope they don’t say Biden.” I pulled the same line on another member and he said, “They’re not Trump signs, are they?” A third church member in the same situation said, “They don’t say, ‘Vote for Jesus’ do they?”  No, they don’t.  For one, that’s corny.  But also because Jesus does not need people to vote for Him. Jesus rules and reigns as the King of kings and the Lord of Lords. His kingdom is not a democracy. The kingdom of God is a monarchy, or a theocracy, to be more exact.

Jesus doesn’t need your vote.  Jesus is Lord, and Caesar is not Lord.  There have been many times and places throughout human history that putting such a sign in your yard, or even saying the words “Jesus is Lord” in public, could instigate harm, either socially, financially, or physically.  In the first century, one of Rome’s popular political mottos was “Caesar is Lord.”  In that context, you can imagine the kind of stir that going around the marketplace declaring, “Jesus is Lord” might create. Picture angry mobs. Picture believers losing business. Picture beatings from soldiers and being thrown to wild animals in the gladiator arenas from jealous politicians.Such persecution is a modern reality in places like North

Thanks be to God that we live in a nation where religious freedom and free speech are written into our founding documents. Thanks be to God we live in a town like Defiance, Ohio that still invites Christian pastors to pray before City Council meetings.  It would be a worthy practice to regularly thank the Lord for the peaceful lives we live.

Politics Are Not Unimportant

Throughout our nation there are President Trump and Biden signs, signaling a measure of allegiance, loyalty, and hope that one of these men can put together a government that makes our country stronger and more just.   Politics are not unimportant. As a Christian, I am learning to think about political involvement as an expression of love and seeking justice for my neighbor.  With that mentality, not caring about politics could be seen as unloving because the opposite of love is not hatred, it’s apathy toward others. There are political issues that may not affect you, but they affect your neighbor. So Christians should care.

How to Vote:  For People Who Don’t Care, and People who Care Too Much

You don’t need me to tell you what to do in the voting booth.  Even if I did tell you who to vote for I suspect it would do little to change your opinion.  But if you haven’t fixed your opinion, I will give you some rather obvious pieces of advice that are often overlooked.

1.  Take time to study the party platforms so you’re an informed voter. Did you know there are more than two parties? (Here are some summaries on the parties: Republican. Democratic. Libertarian. Constitution. Green.

Perhaps take one of those quizzes that ask your take on the issues, and tells you which party and candidate lines up with your views.  Examine the character of the men and women running for office.

Whatever you do, don’t be a real-life version of this SNL parody of the “Undecided Voters.”

2. Learn the local issues and remember that local and state elections will probably affect your life more than the national election. Read the local paper’s summary of candidates and issues.

3. Consider your neighbors, and think about not just your own preferences but the lives struggles of your neighbors who are disadvantaged, immigrants, or not yet born.

4. Apply the wisdom and truth of scripture to your opinions, which is easy to say and hard to do. The best book I have read on this topic is How the Nations Rage, by Jonathan Leeman.

John Wesley has some good advice in his day:

“1. To vote…for the person they judged most worthy; 2. To speak no evil of the person they voted against; and 3. To take care their spirits were not sharpened against those that voted on the other side.”

6. Pray for our current and future leaders

8. Pray more, to remind yourself how inconsequential your vote is in light of how consequential it is that Jesus is Lord.

Creation Is Headless and Desperately Looking for its Head

Every election season I reflect on these powerful, poetic words from Richard Lovelace,

“In the hearts of the people is the groping, inarticulate conviction that, if the right ruler would only come along the world would be healed of all its wounds.  Creation is headless and desperately looking for its head” (1).

Since Genesis 3 the world has been suffering the agony and disorder of rule gone wrong. Adam and Eve should haved lived under the Lord’s rule, and ruled over the serpent.  But they got it backward and were ruled by the serpent and tried to hijack God’s rule. Because of this the whole warp and woof of creation was torn and set out of alignment. Because of this, we are all born messed up. Since the fall, people have been looking for a leader to put it all back together again. So when a strong leader arises, there is within us a small hope that maybe he or she can mend a bit of what’s broken in our world. Inevitably, we get sorely disappointed with every human leader. That’s the point.

Only Jesus is Lord. Only King Jesus will set the world aright to the degree that our hearts are silently hoping for.  Only the perfect government of Jesus will one day satisfy us forever and not disappoint us. The more we get emotionally riled up about the politics of today, the more we demonstrate that our true hope is not securely fixed on the future kingdom of God.

Jesus doesn’t need your vote.  He is already Lord of all. Not everyone knows that yet, but it is a message for everyone.  Only those who shape their lives under His loving rule truly believe Him to be Lord. Jesus says, “Not everyone who says to me, ‘Lord, Lord,’ will enter the kingdom of heaven, but the  one who does the will of my Father who is in heaven” (Matthew 7:21). Unless we begin and continue on that life-long U-turns called repentance, saying “Lord, Lord” is empty. But there will come a day when every knee will bow before Jesus and every tongue will say aloud, “Jesus is Lord” (Philippians 2:11).   On that day, some will say “Jesus is Lord” with shame and terror. Like the Roman soldier who saw the way Jesus died and suddenly realized with a sickening horror, “Truly, this man was the Son of God” (Mark 15:39). In other words, “How did I miss this? What have I done?” When Jesus comes again with all his terrifying glory, everyone on the planet will suddenly see that He is Lord.  What is hidden will be revealed. What is known by faith will be seen by sight. As Johnny Cash sang, “He decides who to free and to blame when the man comes around.”

On that day, some will say “Jesus is Lord” with joy-filled awe. Those who eagerly await His coming, while trusting in His sacrifice on the cross, will not cower in fear on that day but instead will have their greatest longings satisfied in Him.

Jesus doesn’t need your vote. He is Lord.  So as you prepare to vote in November, place all your hope and trust in Him as Lord of all.  Determine to hope entirely in our Lord Jesus, who is bringing a kingdom of justice, peace, and love that will not end nor disappoint.  And if you want a political yard sign to remind you of that, King’s Cross Church has you covered.

Therefore, preparing your minds for action, and being sober-minded, set your hope fully on the grace that will be brought to you at the revelation of Jesus Christ (1 Peter 1:13).